The abbey church of Le Monastier-sur-Gazeille, dedicated to Saint Chaffre or Saint Théofrède, owes its name to one of the early abbots, martyrized around 800. Today the abbey church is the second Romanesque edifice in Velay after the cathedral Notre-Dame du Puy.

Second Romanesque edifice in the Haute-Loire after the cathedral Notre-Dame du Puy, the abbey church of Le Monastier-sur-Gazeille was at the height of its power at the end of the 12th century, time when the influence of Saint-Chaffre abbey spread all over a vast territory in the south of France: the Rhone valley, part of Ardèche, Dauphiné, Gévaudan, Rouergue, Provence and beyond to the Alpes and the Italian Piémont.  At that time the abbey was at the head of a network of 250 dependencies.

The ancient sanctuary of the monks, which  became the parish church after the French Revolution, possesses a remarkable Romanesque façade adorned with a sculpted frieze under the cornice and facework composed of coloured mosaics. The famous 11th or 12th century bust of Saint Chaffre,  visible in the museum of the Espace  Culturel  Européen, belongs to the outstanding abbey treasure.

Built mostly out of local volcanic stone, part of the  church dates from the 12th century. The vaults collapsed in the 15th century – perhaps due to an earthquake which occurred in Auvergne – and  several reconstructions and transformations were carried out. 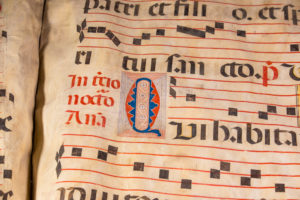 Notice the striking contrast between the dark volcanic stones of the nave with its robust Romanesque columns and the white sandstones of the choir. Overhead, there  is  a graceful ogival gothic vault.

The abbey church possesses an ambulatory surrounded by radiating chapels around the choir. The Renaissance chapel, dating from 1547, was added by abbot Charles de Sennectaire. The many Romanesque capitals featuring  inside and outside the church, are decorated with mermaids, oxen, atlantes, griffins, monsters and foliage. The large stained-glass window containing 3 medallions on the west front,  depicts the martyr of Saint Chaffre, probably stoned to death in the 8th century.

To legitimize the existence of an abbey, a strong sign was needed to mark its birth. The death of abbot Théofrède, attributed to the Saracens by some, to local heathens by others, would remain deeply engraved in the history of the abbey.