The GR 70, an interlude in the life of Robert Louis Stevenson

When illness forges the character and influences destiny … It is maybe the life of Robert Louis Stevenson which offers us the finest of his works. Today walkers can follow in his footsteps and relive an interlude of his life, an interlude called the GR70 or Stevenson path.

The Stevenson path, GR70, follows the route taken by the famous Scottish writer with his donkey Modestine from Le Monastier-sur-Gazeille to Saint Jean du Gard. Stevenson, famous Scottish author (1850-1894) is known for Treasure Island, The strange case of Dr Jekyll and Mr Hyde. When the young man of 28 arrived in Le Monastier in September 1878, where he would stay for nearly a month, he had not yet written these two books.

Stevenson undertook this journey to learn more about the history of the Camisards in the Cévennes. He wanted to discover their country and at the same time forget Fanny Osbourne, a young American woman, married and mother of two children, that he had met at Grèz-sur-Loing near Fontainbleau  2 years earlier and with whom he had fallen in love. Fanny in fact, eventually divorced her husband and  married Stevenson  in 1880.

The account of his journey was published under the title of Travels with a donkey in the Cévennes and the first chapter is devoted to an amusing description of the inhabitants of Le Monastier. In this village, according to Stevenson, drunkenness and political dissension seemed to be typical of daily life in 1878 ! 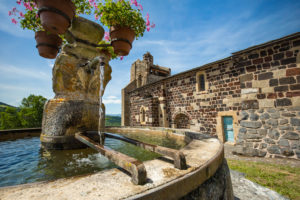 During his youth,  Robert Louis suffered from frail health and often had to stay in bed. His nurse “Cummy” (Alison Cunningham) was totally devoted to her young charge and would read adventure stories, tales, and Scottish legends to him all day long. The young boy’s imagination was fired by the dramatic stories of his ancestors and later, his narrative talent  would be expressed in his adventure novels and other literary works full of  fantasy and bravery.

By setting off on the Stevenson path, the present-day walker, accompanied by his logbook Travels with a donkey in the Cévennes can relive the adventures of the writer walker, pioneer of modern hiking. Several donkey-hirers can offer you your “Modestine” to go walking in the footsteps of the famous author.

“In a little place called Le Monastier in a pleasant highland valley 15 miles from Le Puy, I spent about a month of fine days »