Le Puy-en-Velay is above all a town  steeped in history which owes its renown to the Saint James Way and its historic monuments such as The Cathedral Notre-Dame du Puy and the Rocher saint-Michel d’Aiguilhe, respectively ranked as 2nd and 4th “favorite monuments of the French”.

Le Puy-en-Velay is a moderately-sized town which possesses a remarkable wealth of religious heritage. The splendid Cathedral Notre-Dame du Puy with its cloisters is considered to be one of the finest  examples of a Romanesque architectural complex in Auvergne and in Europe. It was listed as a Historic Monument in the 19th century and in 1998, classified as UNESCO world heritage in relation to the Saint James Way. Later, in 2015, the cathedral became the “Second favorite monument of the French” !

Not to be missed is also the statue of Our Lady of France, made from the iron coming from 213 Russian canons offered by Napoléon lll after the victory of the British-French army over Russia during the Crimean war. Perched on top of the 130 metre high Corneille rock, the statue itself measures 23 metres and after the ascension of the 262 steps, visitors have a breath-taking view over the town of Le Puy and the volcanic landscapes so typical of Auvergne.

Count just 6 more steps to climb up to the awe-inspiring rocher Saint-Michel, the chimney of an ancient volcano on top of which a chapel dedicated to Saint Michael was erected in the 10th century. 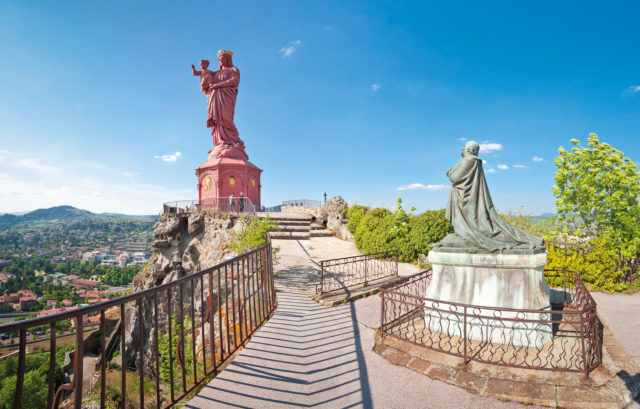 Its outstanding architectural character was no doubt the reason why it was elected “4th favorite monument of the French”.

Of course, Le Puy is also known by the nearly 20 000 pilgrims who each year set off for Santiago de Compostella from the capital town of the Haute-Loire.

Let’s have a change of subject to talk about gastronomy in the Velay.  Maybe you have heard of green lentils (article lentilles vertes) – Protected designation of origin – cultivated in about a hundred communes around Le Puy-en-Velay. Their reputation spreads into the kitchens of the greatest  chefs and of course the Verveine du Velay, the famous liquor recognized for its digestive virtues.

Of course, Le Puy is also known by the nearly 20 000 pilgrims who each year set off for Santiago de Compostella from the capital town of the Haute-Loire for a long journey which will take them to Galicia.